Warning! This does not photograph well!! In fact it looks.... brown and not so delicious. But it is! The chicken is 'red' because it is poached in a lovely soy sauce mix which tints the chicken. I served this with noodles but you could also serve it with boiled rice. I added some of the cooking liquid to the noodles which flavours them nicely. I also drained the liquid when the chicken was cooked, added water and then cornflour to thicken to a sauce. Dunno if that's exactly great food safety but nine hours later and I feel fine and I couldn't let all those lovely flavours go to waste!! 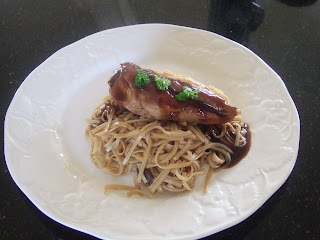 This would be perfect for a nice quick dinner. You could make the soy sauce mix and marinate in the fridge then come home from work, stick on the chicken and noodles and serve within 30 minutes.

4 chicken breasts/chicken thighs
Noodles to serve 4 as per packet instructions.

Mix together all the ingredients for the poaching liquid in a pan big enough to hold the chicken pieces in one layer. You will strain the liquid to make the sauce later so don't worry about big pieces of ginger and garlic, they will infuse the chicken as they cook.

Add the chicken and enough water to cover the chicken. Bring to a boil and then simmer for 30 minutes.

To cook the noodles, place in a pan and top with boiling water. Add 4 tbsp of the liquid from the chicken and boil until soft.

To make the sauce take another four tablespoons of the liquid from the chicken and place in a small pan under a medium heat. Because we used dark soy sauce the liquid at this time is very sharp. Add the 4 tbsp of water. Mix a tbsp of cornflour with a little cold water (approx 2 tbsp) until smooth. Cornflour goes very gloopy when water is first added, so mix rigorously until smooth. Add to the liquid constantly whisking until slightly thickened. If you do not whisk the sauce, the cornflour will go lumpy so keep whisking for about 5 minutes.

Serve by draining the noodles and the chicken. Spoon over the sauce and top with fresh coriander for a bit of colour.
Posted by Deirdre at 14:53

Email ThisBlogThis!Share to TwitterShare to FacebookShare to Pinterest
Labels: dinner