I hate the way you don't get the desert menu with the main meal and starter menus in most restaurants. How can you properly consider whether you're going to get a starter or not? I have a baby appetite unlike Mr Mushroom Hater who considers it blasphemous not to have every available course course when we go out to dinner. But he is a bottomless pit of food; I've seen him eating a bacon sandwich half an hour after a full roast dinner. I don't like to be too full, I feel queasy and sleepy. Only if the desert selection is uninteresting will I usually order a starter. Another disadvantage is deciding what you're going to get for your main course. This makes me sound like a freak but I like to have some continuity between my courses. Like if I'm getting something hot and spicy for mains I'll order something cooling and simple for desert. I also judge a restaurant on its desert menu. It's my area of expertise in a way. If the desert menu is lacking imagination and strongly suggesting 'I was made three days ago but put me in the microwave and you can charge what you like' then I don't have high hopes for the establishment as a whole. What can I say? I'm a hard girl to please!

This desert is a perfect accompaniment to a heavy meal or for those who like something light and fresh for desert. The pears are poached in syrup infused with cinnamon and star anise, a liquorice-y spice available in most supermarkets and great value if you buy in an asian food store. The fluffy meringue is set off by the crunch of the flaked almonds.

Method:
1. Place apple juice in a pan with cinnamon stick, vanilla pod, star anise and caster sugar. Cook over a low heat. Stir until all is dissolved and there is no grainy sugar at the bottom of the pan.
2. Cut the pears in half lengthways and scoop out the core and seeds with a teaspoon. Leave the stalk, it looks pretty for presentation.
3. Add the pears to the apple juice with the orange slices and bring to the boil. Once at a rolling boil reduce the heat and simmer for 15-20 minutes until just soft. Pierce the centre with a knife if you're not sure, but we gentle and don't break the pear.
4. Remove with  a slotted spoon. Leave the syrup in the pan and simmer for 15-20 minutes until thick and glossy. This is also AMAZING on fruit salad.
5. Preheat the oven to 190oC.
6. To make the meringue put the egg whites in a bowl and beat with an electric whisk until stiff and forming soft peaks. Add half the caster sugar, beat, then add the vanilla seeds and rest of sugar and beat until you can turn the bowl upside down and the meringue stays put! Probably about 3 minutes of steady beating.
7. Arrange the pears on a baking tray and spoon a heaped tablespoon of meringue over the hole where the core was. Bake in the oven for 5 minutes until the meringue browns.
8. To serve sprinkle flaked almonds over the pears. Place the pear on an orange round to stop it sliding.  Spoon a little syrup over and put a little scoop of vanilla ice cream on the side. 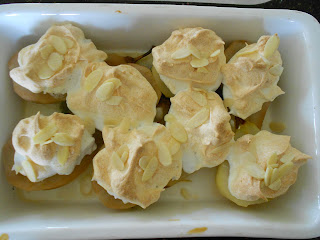 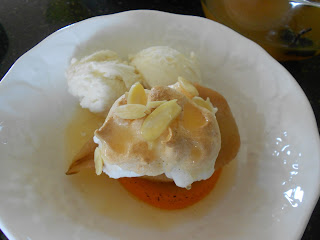