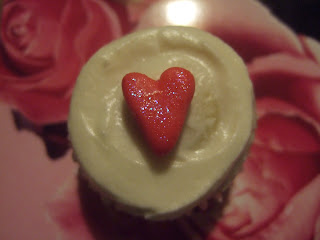 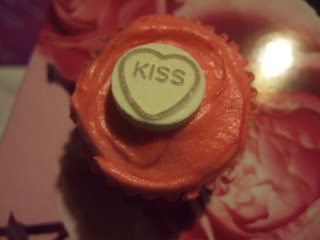 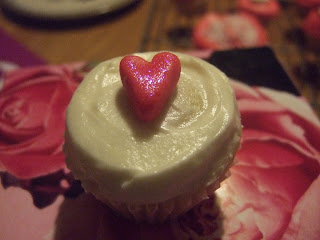 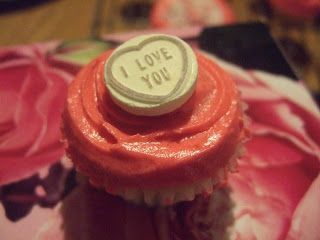 I was going to lecture on how Valentine's Day is the worst of all those phoney made up holidays. A day of cheap chocolate and over priced flowers. We just survive Christmas and are assaulted with sky scrappers of towering milk tray and heart hugging teddies. But HEY if the 'holiday' gives me an excuse to make kitsch cute cupcakes it would be hypocritical to knock it. These Rose Cupcakes are from (surprise surprise!) the Primrose Bakery Book. I was afraid they would taste tacky, like cheap turkish delight, over scented and strong but they made the loveliest delicate sponge with a hint of fragrance. I should be punished for ever doubting Primrose Bakery....

The sweets I used are widely available and cheap and I think look really cute. Some of the messages on them are hilarious- 'dream boy' and 'bless you'. They feel like sweets they would've sold in the 1950's and we used to have great fun handing them to boys and giggling when we were kids. The hearts were moulded out of marzipan I coloured with red food colouring and brushed with a little pink glitter mixed with vanilla extract.

You can buy Rosewater in pharmacies. Quite a big bottle will set out back around €3.

From 'Cupcakes from the Primrose Bakery'

1. Preheat the oven to 160oC(fan)/180oC.
2. Cream the butter and sugar until fluffy- around 3-5 minutes using an electric beater.
3. Combine the two flours in a separate bowl. Add the eggs to the butter and sugar one at a time adding a heaped tablespoon of flour with each addition of egg.
4. Add one third of the flour to the mixture and beat well.
5. Mix the water and rosewater together. Beat in one third milk and one third flour until all the flour and milk are gone.
6. Bake for about 20-25 minutes until raised and golden brown. Leave to cool.

Email ThisBlogThis!Share to TwitterShare to FacebookShare to Pinterest
Labels: cupcakes