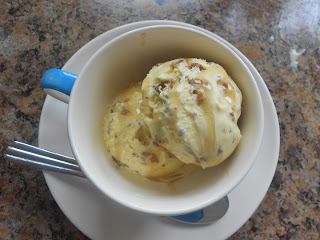 You have to go away to really appreciate home. It's a very annoying part of the human condition, but pretty inescapable. After six weeks away I almost began to miss a good Irish 'I think the world is ending' rainshower- almost. I definitely missed good tea bags, a nice Irish 'rasher' and of course brown bread. Properly known as Irish Soda Bread there is no yeast- the only raising agent is baking powder. Wholemeal flour gives it a dark appearance and a crunchy texture. Buttermilk is the liquid left over after butter is churned. It looks god awful, floating clumps in a grey-white liquid but it adds a tang to this bread balancing it out nicely. If you don't have buttermilk add a tsp of lemon juice to milk and leave it overnight. It won't be pretty in the morning but it will make good bread!

I see this ice-cream in fancy restaurants now, it's getting a sort of revival. It sounds weird but if you haven't tried it you really should, especially since this recipe is a cheater one- you could have it whipped up in minutes. Use thick country-style bread for the most authentic result.

From Tartine Bread by Chad Robertson

1. Crumble the brown bread into rough small chunks- you want some texture so don't pulse them in a food processor, just pull apart in your hands.
2. Mix the brown bread, salt, sugar and cinnamon in a bowl.
3. Melt the butter in the microwave or on the hob and allow to cool. Pour into the brown bread mix and mix until butter evenly coats the dry ingredients.
4. Spread on a baking sheet and bake at 180oC for 15-20 minutes, stirring a few times to make sure they don't burn. You want them crispy but not burn, dark and caramelised.
5. Allow to cool and then into 1.25L good quality vanilla ice cream. Re-freeze before you serve.